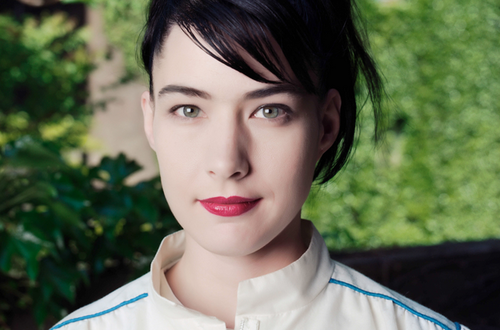 Kathleen Hanna is one of the most influential and important figures in music: she spearheaded the riot grrrl feminist movement, fronted Bikini Kill and the less-serrated Le Tigre, unwittingly named Smells Like Teen Spirit when a piece of improvisational graffiti she wrote on a wall sparked something in Cobain, and married a Beastie Boy – despite the group’s misogynistic past.

Hanna was the subject of last year’s documentary The Punk Singer, and is currently in the country with her band The Julie Ruin.

How does it feel to have a life-spanning documentary made about yourself, considering you are still very much active?

It’s really, really weird. I feel like I turned myself into a statue at 45. I was really sick [with Lyme Disease] and I thought I was dying, so I did all this archiving work and then… I lived, and I have to live with all this historical revision, and I’ve always hated that. I used to live in Olympia, Washington and we got a record pressed, and we used to get all this press and stuff for the riot grrrl scene, and then a bunch of people moved to Olympia, thinking, “Oh, I’m going to be a part of this riot grrrl scene”, but they didn’t contribute, they just came and, like, stared at us. That was a big reason I think that Kathi [Wilcox] and I moved, because we didn’t want to be in a situation where every time we played a show, every time we went to something, people were like, “This is a historical moment.”

Well, it was around that time that you did a press blackout. What made you say ‘enough’s enough’?

I think it was one thing with the riot grrrl scene, and another thing being in a band. Even with Bikini Kill, when we wanted to go to England, which was the first place we went – and the first place I’d ever been outside of the US – we had to do an interview with NME. The people who were flying us over were like, “Either you do this, or I’m not going to send the money”, because we had to get press, or people wouldn’t come to the shows. So I always knew it was important – the crazy thing is people just wrote about us anyway, even though we didn’t do interviews, and afterwards I realised, ‘wow, most bands don’t get that’. When people started wanting me to do interviews, I was kinda shook at first, but I have learnt that if they ask a question I don’t have to answer it. We were super young then, and naive, and answered every question. Now I really want people to know about the projects that I do, because I believe in them.

You mentioned you started to archive. Was that what prompted the launch of Bikini Kill Records, and the re-release of the debut EP? Are there plans to continue re-releasing the catalogue?

The next thing we’re doing is – we did a split album with Huggy Bear – and we’re putting that out, but we can’t put out the Huggy Bear side because we can’t get in touch with everyone. We’re actually putting a bunch of unreleased material like live concerts, and recordings, that I think – if people are into our band – it is kinda interesting, because you can see the evolution. There’s a song that’s a b-side song, that nobody’s ever heard, so I’m actually more excited about the b-side. It sounds terrible; it was recorded by my boyfriend on his four-track. We recorded over another band that he recorded, and you can hear really faintly, the other band playing in the background. But we remastered it.

What’s it like to go back and listen? Because of Bikini Kill’s enduring popularity, are these songs that have been constant throughout your life, or is it very much revisiting your younger self?

I never really looked back, I’ve always been like, “Okay, that is something I did, now I’m doing this next thing.” I’ve always been pretty in the moment with my work, so it was weird, because I had to actually listen to things because we were remastering stuff. So I would get sent a test pressing and I would have to actually listen to my songs. I was like, “Whoa, we had some really good songs.” It was a positive experience because I’d never actually appreciated or been proud of what we did. I’ve always been ‘that was then, this is now.’ But with this archival project, I was really proud.

A lot of people are embarrassed by their younger self. I’m glad you found value in looking back.

Do you see the influence of Bikini Kill and riot grrrl around now?

I don’t know. I mean, I know there’s a lot of feminist stuff in the underground happening in the US, where women in bands are copping a lot on comment boards and on the Internet. There’s a lot of writing around it, now a lot of tweeting between members of bands saying, “Why do I have to take this shit?” “Why’s everyone writing about what I’m wearing and not the music?” – and that’s been the great thing about the Internet – there’s kinda this Internet feminist community forming where it’s like, “Okay, we can talk about this stuff, and not have to take it by ourselves”, and I can see that being kind of a legacy of what we did.

Also, the US Girl Rock Camp here, and you guys have the Rock School in Melbourne – which I visited before – and I think [riot grrrl] really inspired theRock ‘n’ Roll Camp For Girls that are all over the States. When I go in and do a lecture, it’s amazing. It’s like the promise of riot grrrl realised, you know? It’s girls from 11 to 17 making music together, and all different types of girls, not just pop girls, and that is a really wonderful thing to be a part of. I know a lot of those were inspired by riot grrrl – and that makes me extremely proud.

It does seem to be an extension of what you were doing, especially the inclusive nature. Do you think there’s a downside to this community being primarily online now.

It’s great that people are able to find each other. It’s really difficult to be a young person, and grow up with camera-phones, and all this kind of technology can teach you two things: it can build community, but it can also make it so you’re never anywhere, you know? Always on the phone, always texting, always Instagramming. They’re not present. People are at shows and they not watching – they’re just recording it on their phone. Or texting, “I’m at this show”. How are you even enjoying this show? Let’s just be here, watching this show.

I’ve heard your romance with Adam [Horowitz: Ad Rock from The Beastie Boys] began in Australia.

It was on the Summersault tour that Steven Pav did, and it only happened once, so it wasn’t like the Big Day Out; I think he lost his shirt, his pants, his underwear and his shoes on that deal. We’d never been on a big festival tour at all, we had nice hotels, we were, like, living large – we were so excited because we’d stayed on people’s floors. We’d never had that kind of treatment, and Steve made sure that all of the bands – whether you played by the port-a-potties or by the dumpsters, or on the main stage – got treated the same. We all had nice hotels, that’s why he lost so much money.

That’s where I ended up meeting Adam. I borrowed a skateboard from one of the guys in my outfit and I went up to him and was like, “Hey, do you want to go skateboarding? And then we had a date in Adelaide, skateboarding.

At the time how aware were you of Beastie Boys and all that surrounded them?

Yeah. I wasn’t a huge fan or anything, but I’d heard Paul’s Boutique before and I really, really loved it, but I didn’t know that much about them. I do know that one time [laughs], they wanted to come to one of our shows in New York, and the guy who owned the bar was like, “Wait, you have to hold on. You can’t play yet ‘cos The Beastie Boys are coming.” And I just walked upto the mic, and was like, “Fuck you, we’ll play whenever we want. I’m not waiting for the Beastie Boys. I don’t care about them.”

It was definitely weird. I kinda knew that they had this sexist act, and when I met him, he just didn’t feel like that. He had grown up and he was like a completely different person. I’ve never felt like he has been condescending to me, or thought I was lesser than him. He’s what I want to be when I grow up, and I think I’m what he wants to be when he grows up [laughs].

Did you cop a lot of shit at the time for all that?

There was no Internet and nobody really knew except for in Olympia, which is a really small town. If you make out with someone, everyone knows the next day. Then all of a sudden Ad Rock from The Beastie Boys showed up in Olympia. Why is Ad Rock walking down Main Street? So everyone in our town knew. But I think it was more that I was dating outside of the scene. It wasn’t “he’s sexist” or anything like that; we only dated within our own dating pool, which was guys and girls who were in bands that we toured with, people we met on the road – they were people in the underground, they weren’t rich rock stars. We didn’t date people with money, that’s just not how we did it. I’d never dated anyone with a credit card before.

I definitely got some shit, and some people tried to – I hate to use this word [laughs] – but ‘sabotage’ it for me, and I’m really glad that I didn’t listen to that.