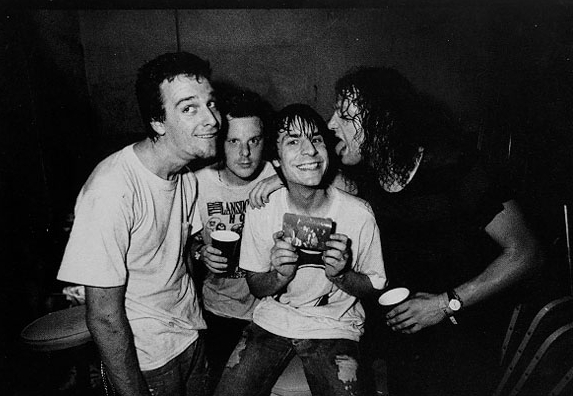 Seattle band Mudhoney are seen by many to be the band that influenced, if not started grunge. Just don’t tell singer Mark Arm that.

“Well, I don’t believe that at all,” says Arm laughing. “I don’t see any similarities in sound between any of the grunge bands. And when we were first starting, The Melvins were also kicking around, and the guys from Mother Love bone. So I think if we weren’t around, those bands would have been doing the exact same thing. I don’t think we influenced any of the Seattle bands, except maybe Nirvana, from what I’ve heard. Nirvana and us were different in the way that we were a little more tuneful and raw.”

Although their achievements may have been overshadowed in the light of the enormous success of Nirvana, Mudhoney were the first success story to come out of the grunge movement in Seattle, with their debut EP for Subpop, Superfuzz Bigmuff, staying on the British indie charts for a year and starting the groundswell that would result in the Seattle grunge movement taking over the world, albeit briefly. What did Mudhoney think of this success at the time? Did it ever go to their heads?

Do Mudhoney ever revisit those earlier days?

“Well, there are songs from that era like ‘Touch Me, I’m Sick’ that we never stopped playing live, but others we don’t. We played a show in London where they wanted us to play the early singles as well as the first album (1989’s Mudhoney) and we had to learn them all again. That was a bit strange. I’m proudest of this latest album, the first EP, and Since We’ve Become Translucent.

Are there any old recordings that are particularly cringe-worthy?

“Well”, he laughs. “I don’t know whether it’s cringe-worthy, but our cover of Sonic Youth’s ‘Halloween’, well it isn’t so good.”

Mudhoney have continued to release albums steadily since the height of the grunge movement. In the wake of Cobain’s death, they released the critically acclaimed My Brother the Cow album through major label Reprise, however it did little to trouble the charts, with most old fans suddenly feeling alienated from Mudhoney, and the scene itself. Tomorrow Hit Today came in 1998 but by this time nobody was listening, and Reprise announced shortly after that they had dropped the band.

Fast forward to 2006, and Mudhoney, having just released Under A Billion Suns are unsure of what the future holds. “Well, we just finished this album, which I think is some of our best work yet,” Arm says. “Then we are touring it extensively. The thing about this band is that we have to really plan things ahead and we are limited a lot by what we can do because we all have other lives, other projects.”

No matter how much the band distances itself from it’s grunge beginnings, it’s a subject Arm knows he will never escape. At least not in interviews. “Every single time, without fail”, is the jovial answer Arm gives, when asked how often interviewers ask him about the G word. It must get tedious. “No, it’s fine,” he adds graciously.

“Every interviewer has a different way of asking or a different question about it, so I’m not always answering the same question over and over again. I don’t mind talking about grunge. People are still interested, and it’s something I am proud to have been a part of.”